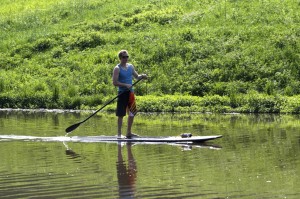 Stand Up Paddle surfing (SUP) is originally from Hawaii, an offshoot of surfing. It enables surfers to paddle out further into the ocean with the help of a paddle. A 2013 report revealed that SUP had the most first-time participants of any outdoor sporting activity in the United States that year. Stand up Paddlers paddle on the lakes, large rivers, canals, ride waves and paddle long distances along the sea coasts, often using tail winds to aid the trip.

Depending on the weather and water conditions, paddlers wear a thin wetsuit or other clothing. However, generally most (if not all) of the time is spent on the board. There are few examples of stand up paddling earlier, but it really began to take off after 2005. Deb Thomas was the first female standup paddler in North America in 2005. Deb and Warren Thomas brought also first production SUPs to market in 2006 and opened first dedicated SUP store in North America, in 2007.

In Finland SUP has started to gain popularity over last few years. Now in almost all the big cities like Helsinki, Turku, Oulu and Tampere there is a possibility to rent SUP boards. Finland offers great places for this sport with numerous lakes, rivers and islands.

On SUP board one paddles in the middle of the board (handle of the board is a good indicator of that) with a little more than a shoulder width stance and feet pointing forward. A SUP board is surprisingly stable (depending also on the size of the board) and the paddling doesn’t require any prior knowledge of the sport, it is very easy to get hang of it and we are more than happy to help you get started!